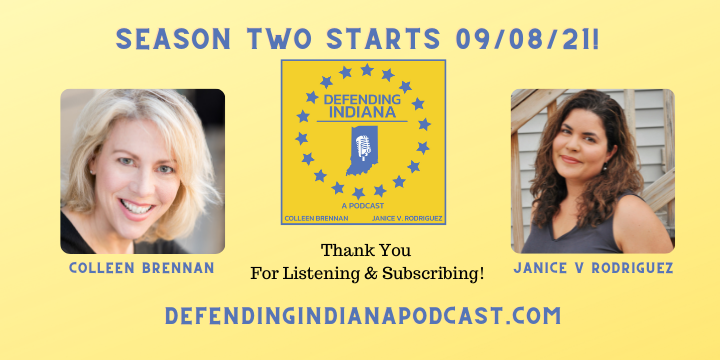 Tired with the jokes, myths and stereotypes they have encountered throughout life, Brennan and Rodriguez dissect the notion that Indiana is a flyover state in the middle of the U.S. known only for corn and basketball. With their guests, Defending Indiana’s hosts sometimes find truth in those misconceptions but attempt to convince listeners there is far more to Indiana than meets the eye.

Season two’s first episode features Hoosier architect and design legend, Tony Costello, FAIA, who sheds light on why Columbus, IN is ranked 6th in the nation for architectural innovation and design by the The American Institute of Architects.  As Costello remarked, “To be selected to do a building in Columbus was arriving.  As a young architect, to get a project here, you had been acknowledged to be one of the up and coming architects.”

In a two-part interview featuring Ford, the Fort Wayne native and current resident of Indianapolis, shares her thoughts on the differences between Hoosiers and New Yorkers.

“On the coasts – where people are making the big money that people here kind of don’t think about or can hardly fathom – they don’t work like Hoosiers.  When I got to New York, I was like, what is this?  Ya’ll just party,” Ford stated.

Inspired by the need to prove there is more than corn and basketball in Indiana, Colleen Brennan and Janice V. Rodriguez, Chicago-based comedians who were born and raised in Indiana, created Defending Indiana to poke fun and pay homage to their home state.  Using humor, personal experiences, facts about the 50 states and special guests, Colleen and Janice discuss Indiana history, government and culture while discovering the good, the bad and the funny.  Defending Indiana is perfect for anyone who likes combining a little education with their laughs.

Listen to all episodes: https://defendingindiana.buzzsprout.com/